On August 29 the rector of Ternopil State Medical University Mykhailo Korda met with the Mayor of Slupsk (Poland) Robert Biedroń. During the meeting they talked about the possibility of collaboration of TSMU and the university in Slupsk. 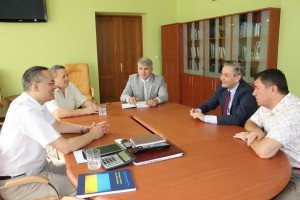 “The cooperation of your university and Pomeranian University can be very effective, because in our university the students gain medicine related specialities, such as public health, emergency care, nursing, physiotherapy and biology. The Pomeranian University is a member of the program “Horizon 2020”, implementation of which was started in Ukraine,” Robert said. The rector is of Ukrainian descent that is why he is very persistent in closer ties of friendship between Poland and Ukraine.

The rector of TSMU Professor Mykhailo Korda described the achievements of the university, the peculiarities of studying in it, specialities that students gain, cooperation with Polish universities. The head of the university emphasized the importance of collaboration between TSMU and Pomeranian University.