Congress participants got acquainted with reports on topical issues during plenary and breakout sessions and discussed urgent matters during satellite symposia and workshops. 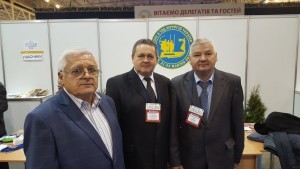 The Board and President of the Association of Surgeons of Ukraine were elected during the congress. The Head of O.Shalimov National Institute of Surgery and Transplantology, the Chief Independent Physician of the Ministry of Public Health in Surgery Professor Oleksii Usenko became the Head of this organization.

The scientists of TSMU presented three reports and one supporting paper at the congress. Gunshot injuries due to warfare in the east of Ukraine were the topical issue of this congress. The reports were presented by military and civilian surgeons, who assisted the injured in ATO region. The surgeon scientists of the leading clinics from all over the world, Germany, the USA, Belarus and Poland, took part at the congress.

The next Congress of Surgeons of Ukraine will be held in Kyiv in 2019.