Recently, the joint training of Ternopil and Ivano-Frankivsk Quick Response Team of the Red Cross was held in Yaremche. The students of Ternopil State Medical University also attended it. The young people are members of TSMU volunteer Team of Red Cross Ternopil Regional Association. 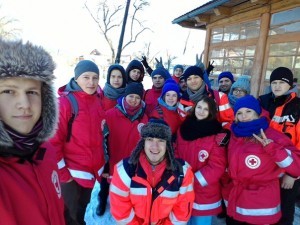 Within a short period of training the participants completed several tasks, such as getting up at 5.00 am to check the emergencies response time. Two teams accomplished it at rapid-fire pace. At a simulated accident there were two injured. Spinal injury and left femur fracture was a provisional diagnosis of the first patient, chest injury, torn off left ear and humerus fracture – of the other one. Only highly skilled persons delivered the first aid, each member of the team accurately accomplished their tasks to rescue the injured. Some participants got the area of the accident under control and looked for the other possible injured. Others immobilized the patient with suspected spinal injury and took him to a safe place by means of Dutch Bridge technique. Occlusive dressing, immovable bandage on the arm, compression band on the head to control bleeding were applied for the patient with chest injury. 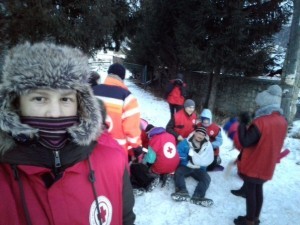 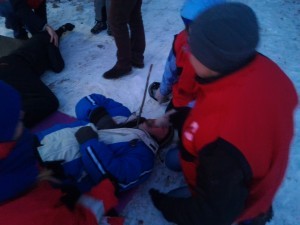 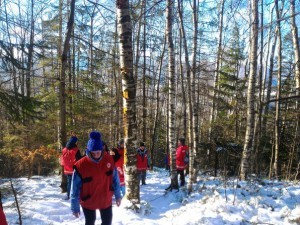 At the same day the participants studied the rescue. Andrii Hvozdetskyi expanded on the immobilization and transportation techniques by means turned out to be at hand. Vasyl Volos explained about the bleeding control methods. Bandrivskyi Mykhailo told about types of pneumothorax, and Roman Kukurudza about proper occlusive dressing applying. 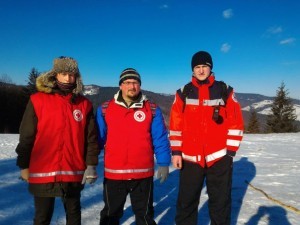 The next day the rescue team walked 9 kilometers to the top of the Makovytsia Mount. On the way back the team was informed by radio about the group of tourists who missed in the mountains. Rescuers started the search for the missed immediately. In a half an hour the tourists were found. Unfortunately, the team faced the unpleasant circumstances: a young man was pressed down by a tree with suspected pelvis and spine fractures, two girls had hysterics and a guy was aggressive. During the first aid delivery the rescuers managed to initiate contacts with the psychologically injured, helped them to calm down, to get warmed, gave them some warm tea and took them away from the scene. The rest of the team used branches and belt to make a stretcher; they placed, fastened and took the casualty to an ambulance. The rescue team accomplished the task perfectly. 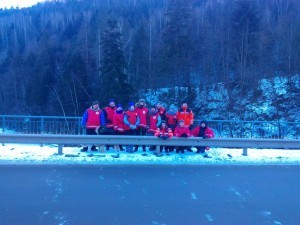 The rescue team stayed in the Carpathians for a short time, but the participants from Ternopil and Ivano-Frankivsk pull together very quickly, this is important during the trainings like this. The two teams united and responded immediately and consistently to the emergency. The rescue team improved their skills in first aid delivery to the injured, their immobilization, bleeding control, transportation and psychological assistance. The atmosphere was very friendly during the training. Quick Response Team should improve their practical skills all the time to be ready to deliver medical aid in any situation. So such training is very important.