On 21 September 2016  renowned British neurosurgeon Henry Marsh will visit Ternopil State Medical University at the invitation of the Student Society and TSMU administration.

Dr. Marsh will meet with TSMU students and also give a lecture titled What It Takes to Make a Good Doctor. The lecture will take place at 4 pm in the TSMU Convocation Hall (Administrative Building, Maidan Voli 1). The lecture is free and open to everyone.

Henry Marsh is a leading neurosurgeon and the author of bestselling book ” Do No Harm: Stories of Life, Death and Brain Surgery”, which was published in 2014, and translated into Ukrainian in 2015. The Ukrainian version of the book was presented last year at the Forum of Publishers in Lviv and has since achieved bestselling status. 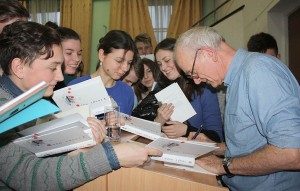 Henry Marsh is also a subject of the documentary film “The English Surgeon” (2007), produced by BBC. Events of the film largely take place in a Ukrainian hospital. Since the early 90’s Henry Marsh has been regularly travelling to Ukraine  to carry out surgeries, consult patients  and train the next generation of neurosurgeons.

A group of TSMU students went to hear a lecture by Dr. Marsh in Lviv earlier this year, and used the occasion to invite him to visit Ternopil. Now all medical students and general public has a chance to meet with Dr. Marsh right here in our city.