During February-July 2016 the analytical center CEDOS carried out an analytical study of the information published on official websites of Ukrainian universities, their faculties and departments, as well as responses to information requests. Transparency of universities was evaluated based on six components (indicators), including administrative transparency, financial transparency, strategic development plan, information on employment opportunities for graduates,  about the possibility of international exchanges and information on academic plans. These components were further divided into more than 40 separate categories. The company deliberately delayed publishing of this year’s ranking to avoid influencing prospective students during the admissions process.

The study covered all state and municipal universities, academies and institutions, with the exception of  military and law enforcement schools which have specific rules of access to information. Overall, it included 186 higher educational institutions, training 1.25 million students, or more than 91% of the total number of university students in Ukraine. This ranking recognized Ternopil State Medical University as one of the best in terms of transparency. In a letter sent to TSMU CEDOS states that “your university sets an example for most universities in Ukraine.” 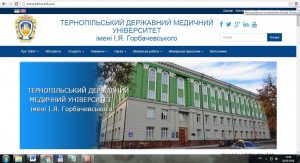 Each university received results of the study on its official email. The letter  listed strengths and weaknesses of each university’s website and provided individual recommendations for improving information content of the web pages.

The study was carried out within the framework of a project “Initiatives for developing of Ukrainian think tanks” by  the International Renaissance Foundation (IRF) in cooperation with the Think Tanks Foundation (TTF), and with financial support from the Embassy of Sweden in Ukraine (SIDA).

Evaluating transparency of universities is one of many mechanisms used for quality assurance. The team of this year’s study sleeked to demonstrate how willing are universities to be open and inform their students, teachers, and the general public about institutional policy through their sites. The ranking aimed to identify best practices among Ukrainian universities, and within each university among its faculties and departments, and to extend these practices to other universities. Transparency of information is not a guarantee of high quality of education, but it is a necessary condition for applicants, students and teachers to make informed choices.

A nation-wide survey conducted in February 2016, showed when choosing a university 56% of current students used university websites as their source of information. This number constantly increases. The new generation applicants will increasingly rely on the university sites, choosing their future profession and universities that can teach it. At the same time, the survey also showed that 59% of students encountered lack of information when choosing a university. The responders singled out the lack of information about employment prospects (22%), recreation opportunities (18%), international exchange programs (16%) and information about the content of programs and disciplines (15%), and qualification of teachers (13 %).