Christmas celebrations took place 25-27 December at the Theater Square , location of the main tree of the city. During this joyful event followers of Roman Catholic, Protestant, and Orthodox churches joined the celebrations as part of the national action “Ukraine and the world celebrate Christmas together.” 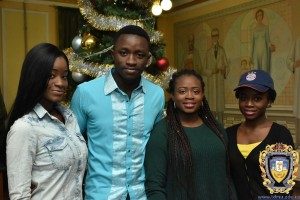 This was a family event, which also attracted many young people. A warm atmosphere of unity with the world reigned throughout. Christmas songs, carols were performed on the stage. Everyone enjoyed the performance of a Christmas-themed play. Participating in the celebration were TSMU international foreign. Together with Ternopil residents they performed Christmas songs, sang Ukrainian and world carols.

“On 25 December the entire world celebrates Christmas. This day is an official public holiday in more than one hundred countries. It is wonderful that Ternopil celebrates with the entire world “- said the dean of the faculty of international students, Professor Petro Selskyi.

Eso Akinsola Solomon said that he enjoys singing Christmas songs in Ukrainian. He thinks that Ukrainian is a melodious language and he has been studying it sine his first year. The young man came to at TSMU from Nigeria and he works towards becoming a surgeon.

Esther Opeyemi Omonijo is also from Nigeria. She has not yet decided on her future medical specialty, but is confident that higher medical education she receives at Ternopil State Medical University will allow her to become a well-qualified specialist.

The future doctors performed together with their countrymen – students from other universities. For instance, Blessing Simeon Abimbola studies at Ternopil National Technical University and Ogbe Bela Ovodjeloche at TNEU. These talented young people befriended through their love of music and song. 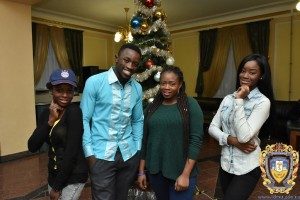 Over fifteen hundred overseas students study at Ternopil State Medical University and the vast majority of them celebrate Christmas according to the Gregorian calendar, in 25 December. This year they had an opportunity to celebrate together with Ternopil residents.