Scientists of Ternopil State Medical University associate professor the Department of Childhood Diseases and Pediatric Surgery Maria Kinash and assistant professor of pediatrics Natalia Haliyash on 8-10 June 2017 took part in the XVI Congress of the Polish Society of Experimental and Clinical Immunology in Warsaw.

Participating in the Congress were 350 specialists from around the world, sharing their knowledge in treating diseases of the immune system, discussing the challenges facing the field of immunology in Poland and in the world, and codifying professional standards.

During the plenary session of the Congress.

Among the notable presentations was a lecture of prof. Tamás Fülöp from the Research Center for Aging of Université de Sherbrook (Canada). He traced age-related changes of the immune system from infancy to old age and introduced several new theories of the immune system in the elderly, including immunological theory of aging developed by R.Walford. This theory introduces the term “immunosenescence”, and the concept of inflamm-ageing, meaning that due to the changes in the congenital and adaptive immune response and increased activation of congenital immunity, aging is accompanied by low-level inflammation. This process can serve to explain the widespread prevalence of many diseases with chronic inflammation in their pathogenesis. This includes cancer, neurodegenerative diseases, cardiovascular and autoimmune diseases. Another theory considers aging of the immune system being due to a chronic CMV infection. The presenter emphasized that age-related changes in the immune system are not always negative, but allow the body to function at a new, more energy-efficient level. In the evolutionary perspective, they should be seen as an adaptation or reconstruction process that protects the elderly body from known threats without spending too much energy, even if it ends up being harmful.

On June 7th, TSMU representatives participated in a meeting of the Polish Working Group on Primary Immunodeficiencies. The framework J-Project brings together scientists from Central and Eastern Europe. Diagnosis of primary immunodeficiencies (PID) remains a hot topic, because their manifestations often are nonspecific. The patients are often being treated for years  by a number of specialists until a diagnosis is determined and proper treatment prescribed. Another problem is that confirmation of PID diagnosis requires genetic research that is expensive and not always available in Ukraine. One of the tasks of J-Project is dissemination of knowledge about PID, as well as the improvement of genetic diagnosis of these disorders, and creation of specific  “genetic map” of congenital defects of the immune system. TSMU scientists met with the head of J-Project prof. Laszlo Maroudi (Hungary), who invited them to join the project and hold one of the next meetings of the working group in Ternopil.

Ternopil State Medical University researchers presented results of their studies as a poster “Ternopil region doctor awareness to the signs of primary immunodeficiencies.” 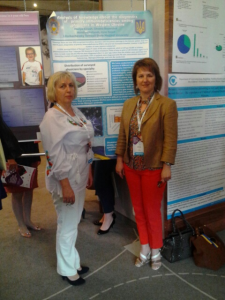 During the poster presentation.