The international educational portal “4 International Colleges & Universities” (http://www.4icu.org/ua/) has unveiled this year’s ranking of institutions of higher education. Ternopil State Medical University named took the 7th place among 140 Ukrainian universities on the list, while placing the first among medical schools overseen by Ministry of Health of Ukraine. Last year our university took thirteenth place. Thus, in a year, TSMU team has improved its performance by 6 positions. 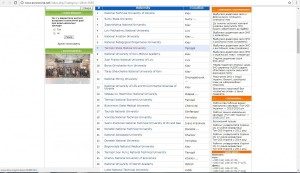 The ranking uses indicators such as references and visits to official websites of the universities. The information is sourced from the databases of the international Internet giant Google, the American company Alexa Internet (a subsidiary of Amazon) and the British company Majestic-12.

In addition, this year TSMU has improved its results in the consolidated rankings of the national internet portal “Освіта.ua” (http://osvita.ua/vnz/rating/51741/), rising up 3 positions compared to last year.

The most important indicator contributing to this ranking is improved standing in the  Scopus citations database, which went up from the 88th to 78th position (Scopus index ranking of universities in 2017 – http://osvita.ua/vnz/rating/55425/, in 2016 – http://osvita.ua/vnz / Rating / 51053 /).