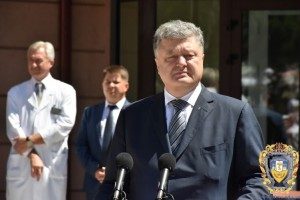 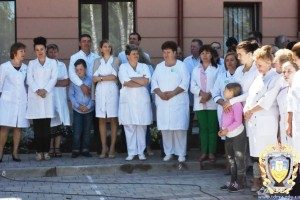 Addressing them, the President noted that decentralization reform allowed for the lion’s share of tax money to remain in local budgets, contributing to the development of the infrastructure of cities, villages and settlements. 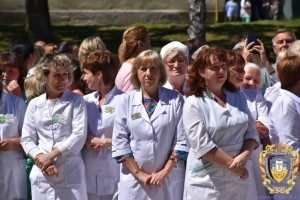 “It is the results of decentralization, because previously all money would be directed to Kyiv. The reform allowed to increase the budgets of local communities seven fold, while the regions no longer need to vie for allocation of funds from the central authorities. At the same time, this allows fighting against corruption. Money stays here on site. This process brings money out of the shadow, encourages transparent purchases, and implementation of a number of other programs”.

“Another important direction of government work is the medical reform. We brought over to Ukraine Uliana Suprun. The medical reform package was reviewed at the National Council for Reforms, which has recommended the Parliament to resolutely implement it. Each visit of a patient to the doctor should be backed with funding, while bright doctors with great reputation, and “golden” hands should finally start getting a decent salary. New bills being introduced envisage development of rural medicine, so that one-third of the country’s population can get effective access to quality medical services. The government has also initiated drug reimbursement programs, hospital modernization and purchases of medical equipment. Today, it is important to keep the cooperation between the central and local authorities going”, said Petro Poroshenko. 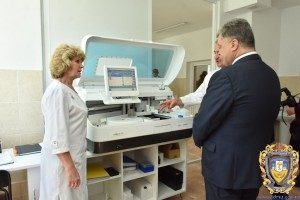 The head of state also expressed his certainty that the opening of the laboratory facility is not the last addition to the university hospital. In his opinion, it would be important to open a modern cardiology center, so that the doctors would be able to perform open heart surgeries in Ternopil rather than having to transport the patients neighboring cities. ” Doctors that work Ternopil are professionals, so why would we miss this opportunity,” said Petro Poroshenko. 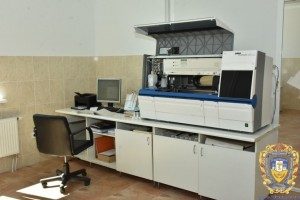 The newly opened building houses a modern laboratory complex and a centralized sterilization facility, while meeting all state building norms and regulations. It fully covers the hospital’s needs in biochemical, immunological, bacteriological and other types of laboratory tests. 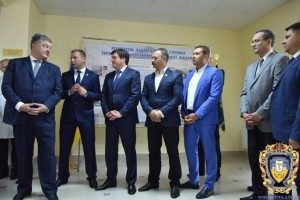 Residents of Ternopil region will have the tests done on world class equipment. The patients will be able to get the results within a few hours.

“The laboratory building of the University Hospital was being constructed for the last four years,” said Vasyl Blikhar, Chief Doctor of Ternopil Regional University Hospital. “The new laboratory center has the most advanced equipment from a leading Swiss company. The physicians now can order the entire spectrum of tests for timely and accurate disease diagnosis. As for the cost of the tests, it is lower in our clinic than in private laboratories. To make them completely free for the patients, there needs to be a reform of health financing. “ 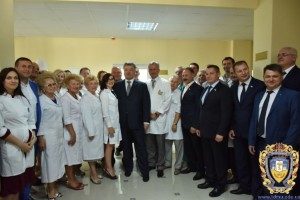 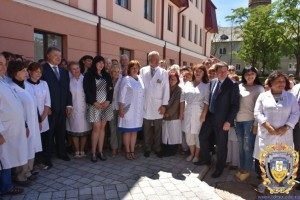 He added that reconstruction of the laboratory building cost 40 million hryvnias, funded by the Regional Development Fund. The cost of the equipment was on a comparable scale. The laboratory is unique for western Ukraine.

At the end of his visit, the President of Ukraine Petro Poroshenko also had a conversation with medical staff.