A new version of the Webometrics Ranking of World Universities, published in January 2018, presents web performance of universities in last six months. Ternopil State Medical University took the first place among Ukrainian medical universities and the 21st place among all 327 national institutions of higher education. (http://www.webometrics.info/en/Europe/Ukraine%20).

The main goal of the Ranking is to promote academic presence on the Internet, to maintain open access to universities’ information, and to facilitate the transfer of scientific and cultural knowledge among world universities. 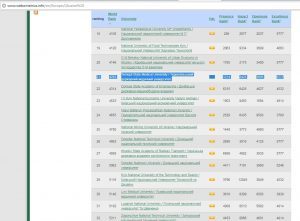 Publication of rankings is among most powerful and effective tools to influence and strengthen the processes of change in academic circles, bolster the commitment of faculty and staff, and create long-term strategies germane to the needs of 21st century. Web presence of a university should provide reliable information about all aspects of the school. Web-indicators help to assess the activities of universities, taking into account their relevance and impact.

The Webometrics Ranking of each university is determined by the following parameters:

Presence  – The number of pages on the University’s site of all formats indexed by the Google search engine.

Transparency reflects the number of citations of scientific publications from the top 10 most cited university authors according to Google Scholar.

Excellence – scientific papers published by the University authors in journals indexed in the SCOPUS bibliometric base, and are among the 10% of the most cited in Scimago Group sections of their scientific fields.

The Ranking has been published since 2004 and are produced twice a year (in June-July and January). by the Cybermetrics Lab of Spanish National Research Council (CSIC), a subdivision of the Ministry of Science and Innovation of Spain.