The site 4 International Colleges & Universities published an updated ranking in January 2018 (https://www.4icu.org/ua/). In it, Ternopil State Medical University has ranked fifth among 171 universities in Ukraine and placed first among medical schools of our country. 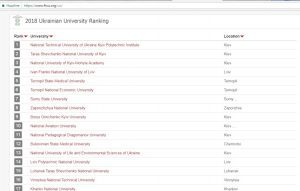 4ICU is an Australian company that has been publishing its ranking since 2005. It assesses the popularity of more than eleven thousand universities in the world and 171 universities Ukraine based on the visits to their web resources. According to the authors of the ranking, this helps international students, teachers and scientists to find out how well a particular institution of higher education is recognized in a certain country.

The 4 International Colleges & Universities International ranking uses an algorithm that calculates four impartial and independent web metrics, and includes data from three different search engines, including Google, the American company Alexa Internet (subsidiary of Amazon) and the British company Majestic-12. According to the methodology, the popularity of Internet resources is determined based on indicators such as site’s visits, the number of links to the site and the importance of the linked resources.