Owing to the long-term international collaboration between I. Horbachevsky Ternopil National Medical University and Akkon University of Human Sciences in Berlin and with the support of the Director of the Institute for Research and International Cooperation, Professor of Akkon University Timo Ulrichs, the Head of the Department of Public Health and Healthcare Management, Professor Hanna Saturska and sixth-year medical students Maria Riabokon and Uliana Saturska participated in the World Health Summit – 2019 and in satellite international forums: the Second German-East European Healthcare Symposium and the Symposium of Young Scientists on Global Health which were held in Berlin, Germany on October 25-30, 2019.

On October 25, 2019, TNMU scientists also participated in the second German and Eastern European Health Symposium on “Integrated Health – Improving Quality of Life”, held under the auspices of the German Eastern Business Association and the German Health Alliance. TNMU representatives had an opportunity to hear interesting reports by German and Eastern European scientists and health care managers, in which the speakers shared their most important achievements and covered the problems of public health in different regions of Europe. 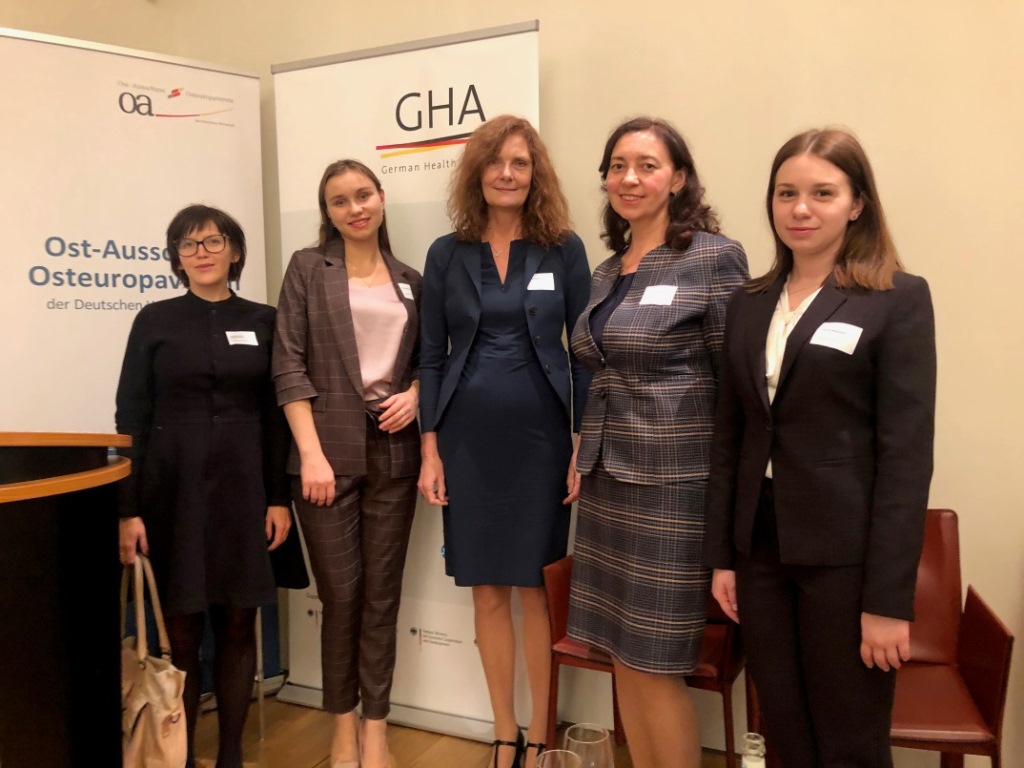 Moreover, TNMU students participated in the International Symposium of Young Scientists on Global Health, the satellite symposium of the World Health Summit – 2019, which was held at Accon University in Berlin with the support of the Federal Ministry of Health and Research Institute of Germany, international cooperation and the Koch-Metschnikow-Forum. 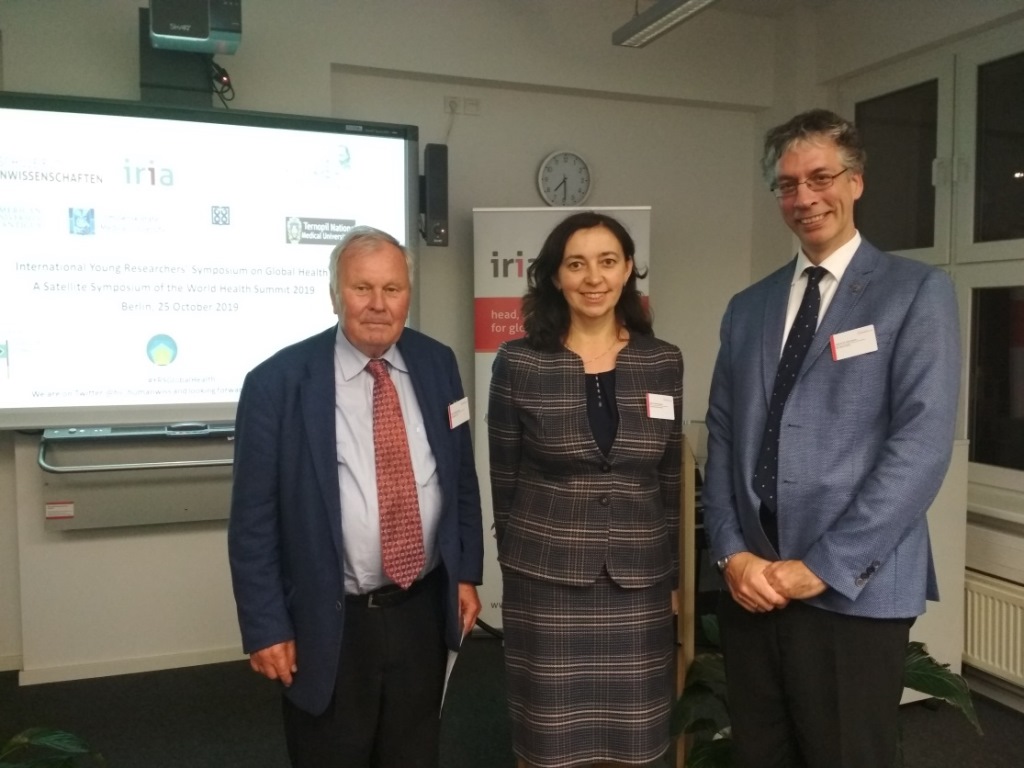 Director of the Koch-Metschnikow-Forum, Prof. Helmut Khan, Prof. Hanna Saturska and Director of the Institute for Research and International Cooperation, Prof. Timo Ulrichs (left to right).

Following the welcoming address of the organizers of the International Symposium, Director of the Institute for Research and International Cooperation, Prof. Timo Ulrichs and Director of the Koch-Metschnikow-Forum, Prof. Helmut Khan and representatives of the universities of Ukraine, the USA and Russia, medical students reported the results of their scientific work on topical issues of public health.

TNMU student Maria Riabokon presented the results of her research paper on “Peculiarities of Palliative Care in Ukraine under the Conditions of Healthcare Reform”. 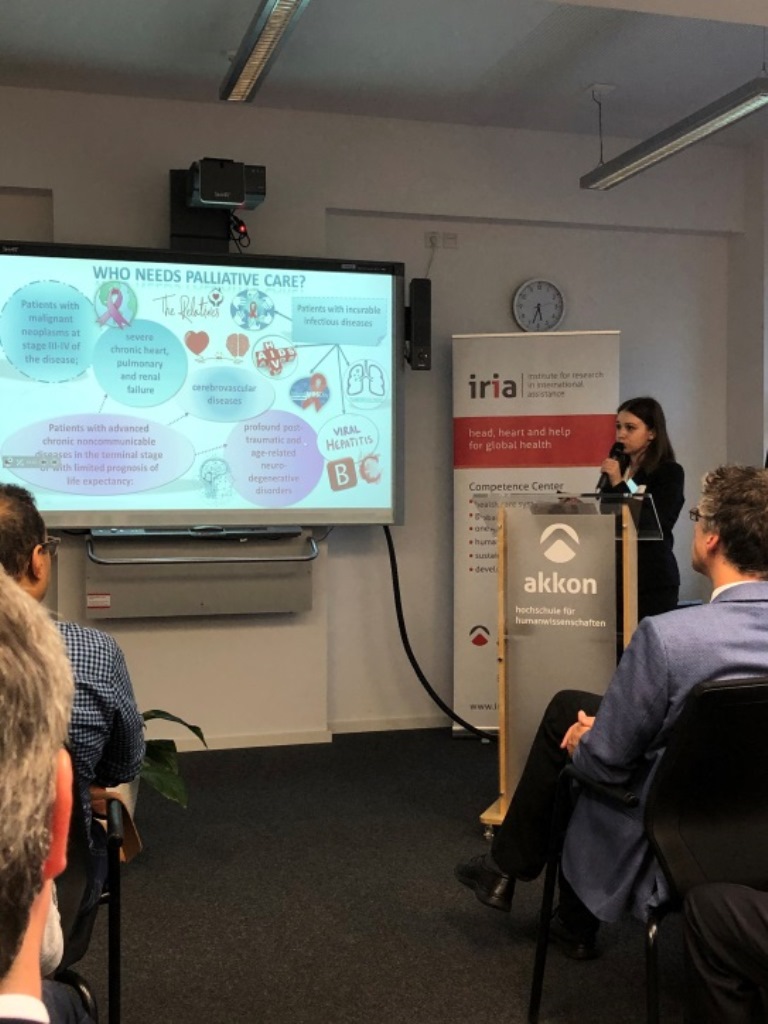 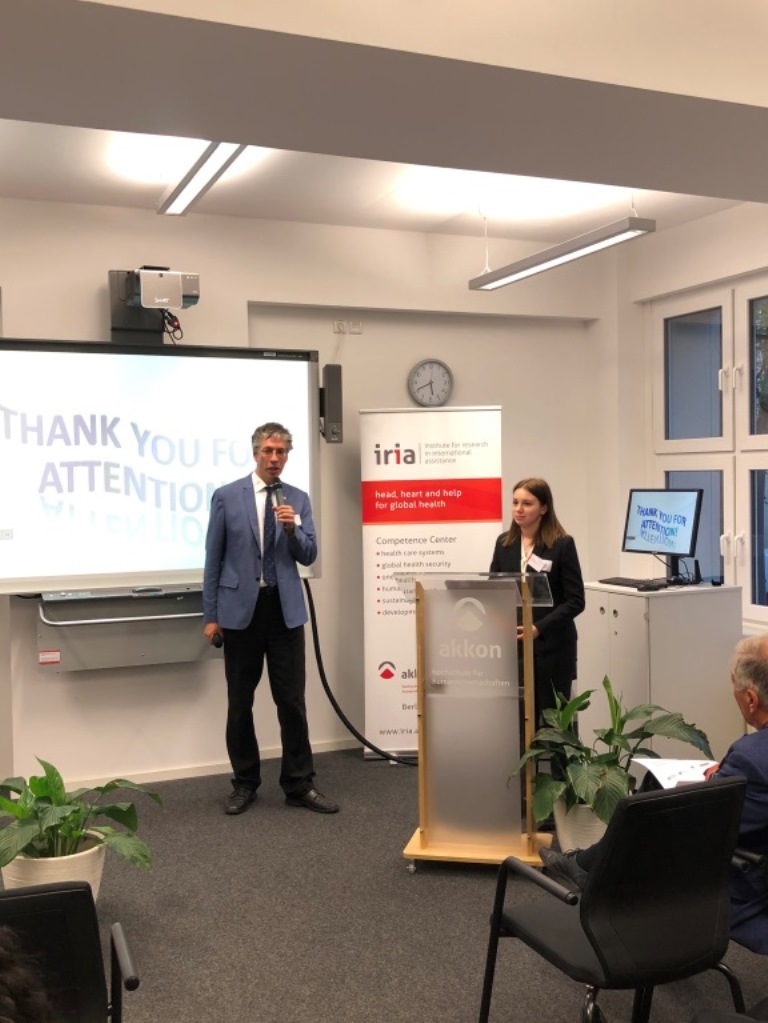 Based on the results of her scientific research, TNMU student Uliana Saturska presented the report on “Improvement of Healthcare of Preterm Babies in Ukraine”. 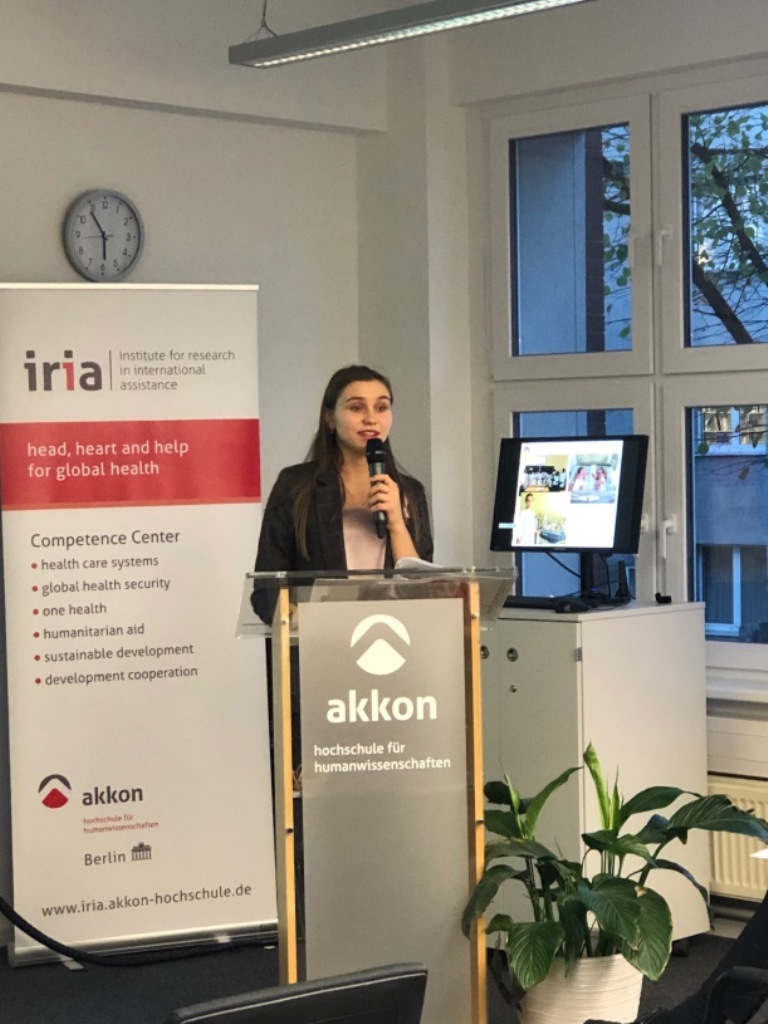 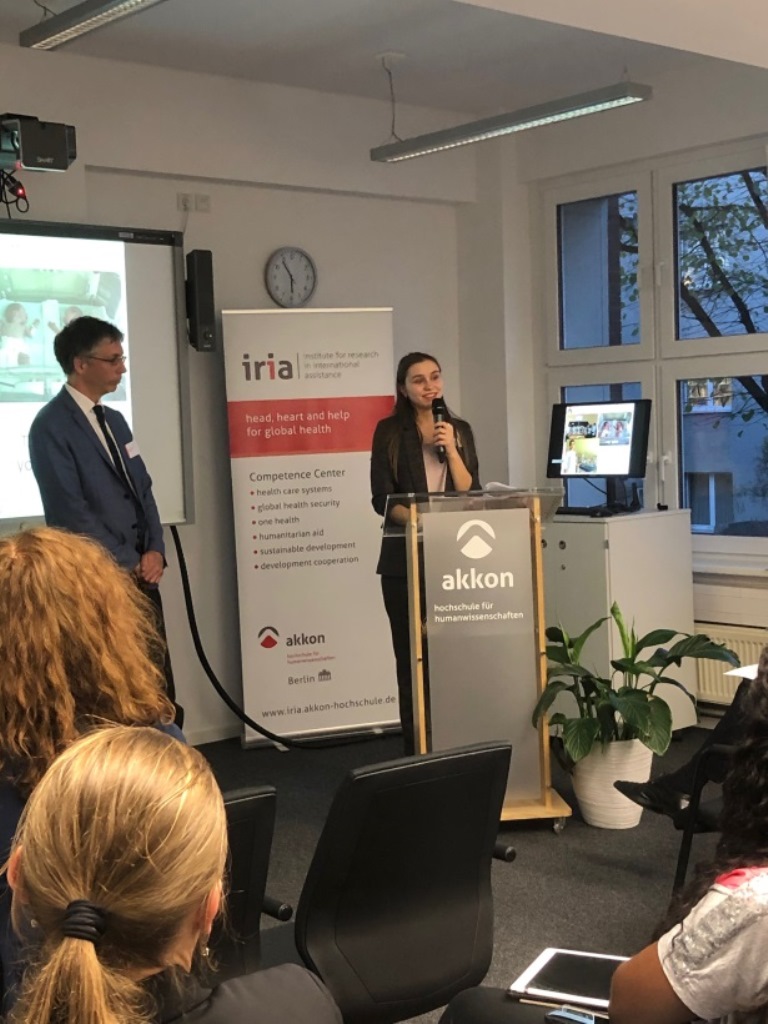 Both reports aroused keen interest among young scientists and guests of the event. 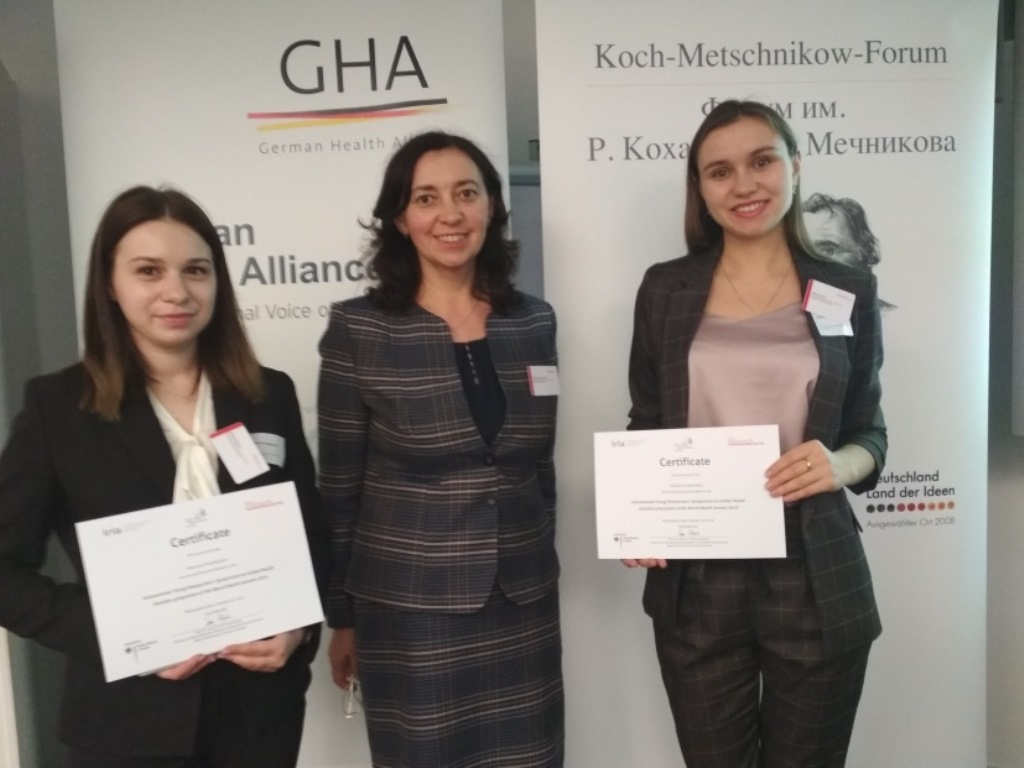 The reports of medical students and young scientists from the USA and Russia were also presented, followed by a heated scientific discussion.

An unforgettable event for TNMU representatives was the participation in the 2019 World Health Summit, held at the KOSMOS conference hall in Berlin for three days (October 27-29, 2019). 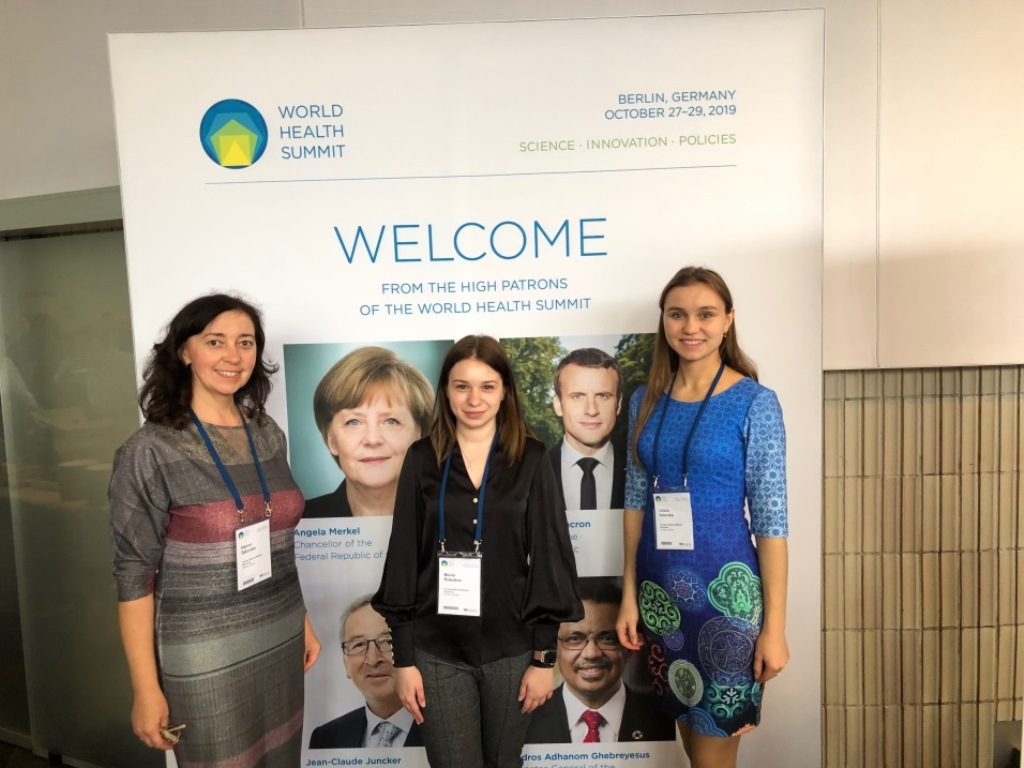 TNMU scientists had an opportunity to participate in panel discussions and workshops held in 5 thematic halls, distributed on a continental basis, as each continent has its own specific healthcare organization and problems. However, the main topics of the summit were those that are most actual for the population of all continents and in need of immediate resolution, including climate change and health; human capital transformation: investing in healthcare and education; universal health provision: empowerment; Sustainable Development Goal (SDG): a global plan of action for healthy living and well-being for all; digital health: shaping society and the modern economy. All the meetings, panel discussions and workshops at the World Health Summit – 2019 were very informative and interesting (for more information visit: https://www.worldhealthsummit.org/summit.html).

The participants would like to express their gratitude to TNMU administration and partners at Accon University in Berlin for the opportunity to participate in the 2019 World Health Summit, the second German and Eastern European Health Symposium and the International Young Scientists Symposium on Global Health and present the results of their scientific work at the international level.