On November 17, 2019, another part of the project “Bronze Ternopil” was opened on the territory of I. Horbachevsky Ternopil National Medical University near the Morphological Building. Now, citizens and visitors of Ternopil will be able to get acquainted with the appearance of the market square and the synagogue, which were destroyed in 1944 during the battle for Ternopil. 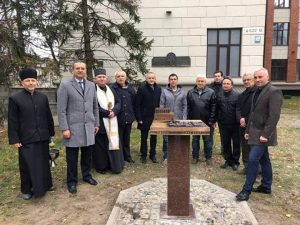 “Thanks to this project, we recreate the history of our city,” said Deputy Mayor Leonid Bytsiura. “It is a story that is completely unexplored, a story that we must recreate for ourselves, a story that must work to develop patriotism. And by involvement and love for the city, we can develop what will relate to the future of the city. “ 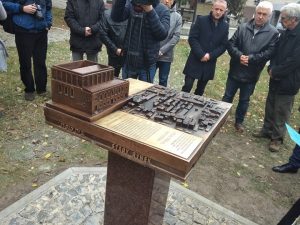 The architect of this project is Volodymyr Krisa. At the opening, he noted that there are very few natives of Ternopil, so there are few people who would have a sense of ancient Ternopil and could pass it on to descendants. “It is very bad that the area on which the market was located has not been preserved, and this is an architectural landmark of all western cities, we have lost it,” sculptor Dmitro Muliarchuk adds. – On this layout we can see the outlines of this place in old times. There is also an idea to create models of the town hall, Jesuit church, railway station, so we ask everyone to join the project “Bronze Ternopil”, because the construction of all bronze monuments became possible only with the assistance of families of indifferent Ternopil citizens, Maslivets, Dihai, Bilian families. 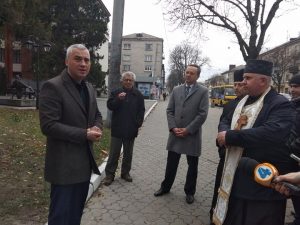 Deputy Mayor Leonid Bytsiura thanked TNMU Rector, Professor Mykhaylo Korda for allowing to establish the market square and a synagogue models on the territory of the University.