The ranking of the world universities Ranking Web of Universities (Webometrics) for July 2020 has been published. The ranking is made up by the Cybermetrics Lab of the Spanish National Research Council (CSIC) of the Spanish Ministry of Science and Innovations. The developers publish it twice a year: in July and January. 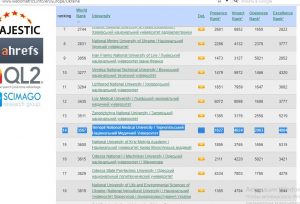 According to the most recent rating, Ternopil National Medical University is the second among medical universities and fourteenth among 317 universities of Ukraine. It should be noted that compare to the results of the Ranking Web of Universities in January 2020, TNMU improved its national result by 13 positions (27th place) and by 18 positions compare to July 2019 (32nd place). The global position of TNMU in Webometrics has also significantly improved. Compare to January, our university is by 1,053 points higher, and by 1,497 points compare to July, last year. 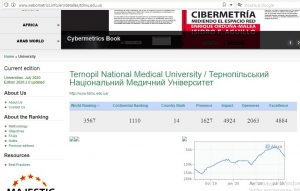 The Webometrics ranking rates more than 24,000 universities around the world (including 320 Ukrainian ones) and has been compiled since 2004 by the Spanish National Research Council, one of Europinian largest research institutions.

The main task of the ranking is to promote academic presence on the Internet, maintain open access in order to significantly increase the transfer of scientific and cultural knowledge in world universities.

Thus, publication of the rankings is one of the most powerful and effective tools for launching and consolidation of changes in academia, increasing of the commitment of scientists and creation of long-term strategies so urgent in the 21st century. Web-rating evaluate the affairs of universities taking into account their activities as well as their urgency and impact. Web presence should be a trustworthy mirror of the university.

When determining the university ranking, the developers take into account the following aspects:

Presence – the number of pages in the institution’s domain (all subdomains and file types are taken into account) according to Google data (5%).

Visibility – the number of external sources that contain backlinks to the university’s website, which is calculated using Ahrefs.com, the external link analysis service, and Majestic, the link analysis system for search optimization and Internet marketing, (50%).

Transparency (or Openness) – the number of citations of the top authors of the institution on Google Scholar Citations (this time with some changes – considering the top 110 authors, excluding the top ten) (10%).

Excellence (or Scholar) – the number of articles of the researchers working at the university, which comprise the top 10% of the most cited ones in 26 disciplines according to Scimago, 2013-2017, (35%).

According to the authors, the Webometrics rating with the help of independent web rating and a scientific-based model, indirectly evaluates all aspects of the university activities: research, academic, cultural, social, sports, etc. This is a distinguishing feature of this ranking from other Internet ratings.