The Centre for International Projects “Euroeducation” (http://www.euroosvita.net/), in partnership with the international group of experts IREG Observatory on Academic Ranking and Excellence (http://ireg-observatory.org/en/), presented a new – the fourteenth academic rating of higher education institutions of Ukraine “Top-200 Ukraine 2020″.

This year, in the ranking, the experts took into account current trends in university development, summarized by the IREG 2019 Conference, Bologna, Italy, May 8-10, 2019, and the Berlin Principles, approved by the participants of the second IREG Meeting (Berlin, Germany, 18-20 May, 2006). 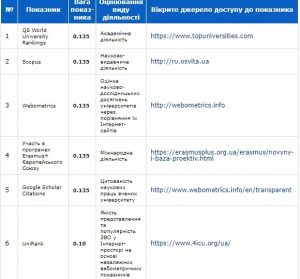 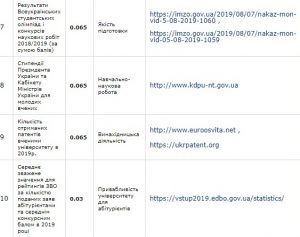 The main indicators of evaluation of university affairs are the results of other rankings, academic mobility programmes, student participation in national Olympiads, as well as the QS World University Rankings, Scopus, Webometrics, participation in the European Union Erasmus+ programmes, Google Scholar Citations, UniRank, results of National Student Olympiads and competitions of research works for 2018/2019 (by the amount of points), scholarships of the President of Ukraine and the Cabinet of Ministers of Ukraine for young researchers, the number of patents received by the university scholars in 2019, the average index for ratings of institutions of higher education by the number of applications submitted by applicants and the average competitive score in 2019.

The main principles for determining the ratings of Ukrainian universities are:

a) Ensuring full openness, transparency and independence of university rankings. Thus, only open data of direct evaluations displayed on open web resources of independent national and international organizations and institutions were used. No data or expert assessments of the universities and their governing bodies were used. The evaluation method of university ratings is available to the public in order to verify the results.
b) Taking into account the comprehensiveness, diversity of university affairs, their work was evaluated jointly on a broader base of indicators compare to the established rating systems. In particular, this year the ranking of Ukrainian universities was evaluated on the basis of ten indicators: six of them are international and four are national.
c) On account of the importance of European integration of higher education of Ukraine, the coefficients of international universities (results in world rankings, participation of universities in the European Union Erasmus+ programmes) are more significant than that of the national indicators (http://www.euroosvita.net/index.php/?category=1&id=6556).