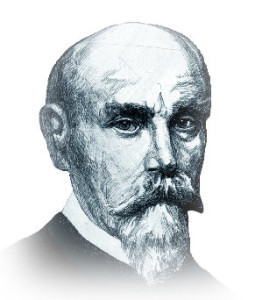 By the decision of the Cabinet of Ministers of Ukraine in 1992 (decree №363 of 1.07.1992) Ternopil State Medical University was named after Academician Ivan Horbachevskyi

Dr. Ivan Horbachevskyi  was one of the most famous scientists of his time in the field of chemical organic synthesis. His investigations were a revolution in medical, organic and biological chemistry.

Having spent eventually all of his adult life outside Ukraine (66 years of his life he lived abroad) Dr. Horbachevskyi always demonstrated great concern for his home country, its achievements and problems.

In 1877 a young graduate of the University of Vienna, Doctor of Medical Sciences Ivan Horbachevskyi was appointed as an assistant at the Institute of Medicinal Chemistry, the University of Vienna. In 1882 he was the first person in the science world to synthesize uric acid from urea and glycine aminoacid. This discovery brought great glory to Austrian science and to Vienna University. Great attention to the synthesis of uric acid outside the organism is explained by the fact that the so-called vitalistic approach existed in biomedicine those days, according to which the substances contained in the living organism cannot be synthesized artificially outside the organism.

In his works Ivan Horbachevskyi explored the causes and pathogenesis of gout, mechanisms of catabolism of mononucleotides, which are constituents of nucleic acids. His hypotheses as to the nature and causes of pellagra were proved by the next generation of scientists and provided the groundwork for developing a rational human nutrition system. His persistent research work in the spheres of organic and biological chemistry enabled him to isolate virtually all amino acids and prove that amino acids are the building blocks of proteins. One of his achievements was that he determined the origins of uric acid in organism.

The significance of his works devoted to the conversion of nucleic acids to end products is highly regarded in the point of view of the regulation of synthesis and decomposition of nucleic acids, which has an impact on our ideas about the life at the molecular level. Due to his great managerial and leadership skills Horbachevskyi was offered a position in the Highest Sanitary Council in Vienna; later he became the President of the Council.

In 1884 Dr. Horbachevskyi became the first professor ever in medical chemistry at the Czech University in Prague. Although being very young, he earned scientific reputation by his paper on the preparation of uric acid by careful melting a mixture of glycine and urea, published in German on just 40 lines

Dr. Horbachevskyi founded the Institute of Medical Chemistry at Charles University, and is regarded as a co-founder of Czech biochemistry. Ivan Horbachevskyi was appointed four times as the Dean of the Faculty of Medicine and once as the Rector of the Czech University in Prague. For his outstanding scientific and public service, Dr. Horbachevskyi was elected as a member of the Royal Czech Scientific Society, a member of the Czech Sanitary Council. Dr. Horbachevskyi made great efforts to improve the environmental situation in the Czech Republic. According to his recommendations the system of sewage treatment was developed in Prague, which prevented the spread of typhoid fever and other infectious diseases among the population.

The works of Dr. Horbachevskyi became an invaluable contribution to Czech science. He developed new methods of synthesizing uric acid, creatine, and discovered the xanthine oxidase enzyme and elements of nucleic acids in the cells, which form uric acid.

His leadership qualities and persistent work contributed greatly to establishing the Ukrainian Free University in Prague. Dr. Horbachevskyi became the Rector of the University, which trained hundreds of physicians – Ukrainians, Czechs, and Slovaks.

Horbachevskyi made invaluable impact on the development of world biochemical science, his outstanding political, educational and public activities in Austria, the Czech Republic and Ukraine made his contribution into the cooperation between the nations, and development in the field of science, education and culture.